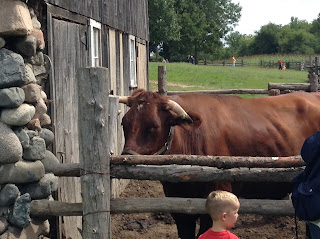 I've been super remiss about taking photos in September now, but that's one from the Oliver Kelley Farm we visited Labor Day weekend.  Can you tell the bull's horns go two different directions?  We all thought that was hilarious!   He was very gentle - and was trying to eat clover out of the children's' hands very neatly.

This week felt very busy. I have been discovering that my current schedule doesn't allow much time for prep or grading or any the things that go into making a class run well.  So we've been trying to move things around a bit.  Not sure how we'll get there but we will eventually, I hope!  The children were away for three days on a school trip so John and I had the place to ourselves for a bit.  He was paid for a Pulpit Supply job and decided that he was going to use it to take me out on a real out-of-the-house date.  Those have been so rare the last two years, so I heartily accepted! It was so very quiet and I really missed tucking the children into bed at night.  Other than that, it was working on things around the house and work.  That was it!

Here's some frugal things that we did this week:

* Made zucchini bread and waffles from scratch this week.

* Re-hung the artwork in our rearranged bedroom.  I'm really loving the new arrangement.  It makes the room feel so much larger!

* John attended two meetings and was fed a snack at one and lunch at the other.

* I continued working on The Big Embroidery Project. I promise I'll share phots when I have a minute!

* Taught an extra Jazzercise class this week as well.

* Rearranged our my evening schedule to use less gas in the car and give me a little more time at work to get ready for classes.

* We cleaned out several more things and put them in the donate pile.  My husband will take these to our favorite thrift store on Saturday.

* Our son brought me back a beautiful little owl figurine from the school trip this week.  They each had  a small amount of spending money and he decided to buy me a gift rather than buying himself treats.  So very sweet and now it has a space on my nightstand where I can see it when I wake up in the morning.   Our daughter bought my husband a small gift too.

* I cut flowers from the yard to make a decoration for the kitchen table along with one of the pumpkins we picked from the yard and candles we already owned.

* We shredded and froze excess zucchini this week.

* John and I had a bonfire one night for an at-home date and he took me out to a favorite restaurant for dinner one night.  We both had leftovers for lunch the next day.

* Did lots of weeding and other yardwork around the rain.  Transplanted some perennials that needed to be separated.

I think that's about it for this week.  How did you do?
Frugal Friday 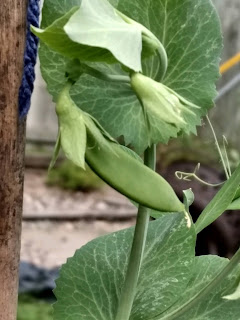 Peas from my garden last summer.  We are cold and snowy with a lot of ice right now!  Not my favorite weather.  So, to cheer myself up I am starting to plan my garden for next summer!  I am hoping that I will be able to grow at least enough tomatoes and cutting flowers for both my parents (who are moving 1 1/2 blocks away from us in about 2 months - hurray!) and our house as well.   I am so grateful that we have 1/5 acre lot for our home that we can grow vegetables flowers and (currently) a single tree.  It makes me so happy and provides some very fresh produce for our family.  I love the physical act of gardening, both flowers and vegetables, and I love the taste of vegetables fresh from the garden.  A win-win in my book for sure! The name of the game this week is to eat up as much of the fresh stuff as we can so it's easy to move the refrigerator downstairs for our remodel.  They start knocking out walls and cutting holes in the outside of the house next week and we will need to
Read more 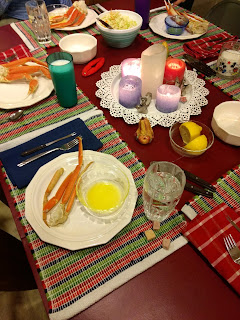 John's Birthday Dinner January 2020  This week started with John's Birthday - he loves crab legs and we typically have them for dinner on his birthday, as part of his birthday gift.  Here in the upper mid-west of the U.S. crab legs are usually on sale at this time of year, so it works out well.   We have so much produce in our freezers and refrigerator this week and we are trying to eat our cupboards down a bit so things are easier to store during the big part of our remodel.  Here is what we are eating this week: Sunday, January 3, John's Birthday:     Brunch: Smoothies, Oatmeal Muffins     Snack: Soft Pretzels     Dinner: Crab Legs, Green Beans Monday, January 4:       Breakfast:  Eggs and Toast      Lunch: Salad with Tuna      Snack: Yogurt      Dinner: Pork Chops, Cauliflower, Carrots Tuesday, January 5:      Breakfast: Oatmeal with Walnuts and Craisins      Lunch: Chicken Noodle Soup from the Freezer      Snack: Yogurt      Dinner: Chicken Lasagna, Green Beans Wednesda
Read more 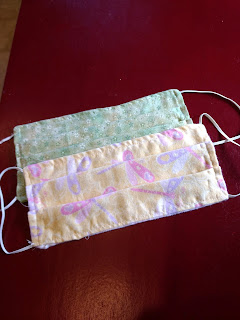